The Final Trial: The Truth: The coming of the Antichrist, ad-Dajjal


The Final Trial: The Truth: The coming of the Antichrist, ad-Dajjal


The Truth: The coming of the Antichrist, ad-Dajjal

Mount Damavand, in Iran which is ancient Persia, Damavand which is the center since ancient times of the most Diabolic Satanic Sorcery. 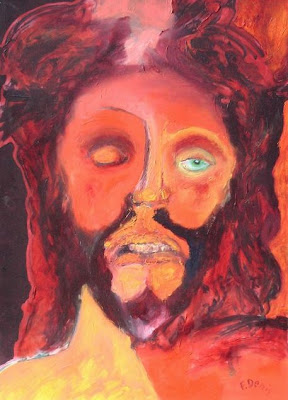 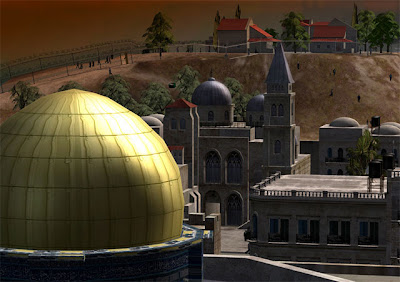 
The land of Palestine and the whole Arab homeland belongs to the Arabs.

In the Book of Deuteronomy, Chapters 28 -- 32 God explicitly tells Moses that the ancient Israelites will trangress the land covenant with God and God will void the covenant permanently and cast them out. Especially see Dt. 31:16,17

"And the Lord said to Moses: Behold thou shalt sleep with thy fathers, and this people rising up will go a fornicating after strange gods in the land, to which they goeth in to dwell: there will they forsake me, and will void the covenant, which I have made with them,

And my wrath shall be kindled against them in that day: and I will forsake them, and will hide my face from them, and they shall be devoured: all evils and  afflictions shall find them, so that they shall say in that day: In truth it is because God is not with me, that these evils have found me." 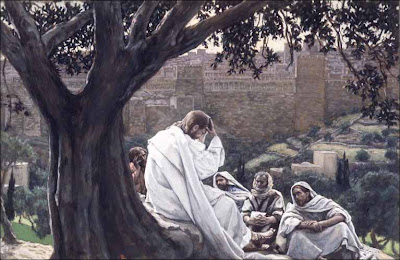 Tissot - Jesus Christ prophesying the destruction of the temple


This came to pass forevermore exactly as Jesus Christ said 1,500 years later when He prophesied the utter destruction of the Temple. That destruction occurred in 70 A.D. 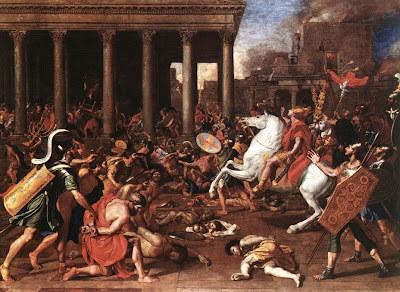 Islam came initially to the Arab people, the descendants of Ishmael, the first born son of Prophet Abraham, through the prophet Muhammad (PBUH), during the Seventh Century, A.D., and Islam spread all over the world, until the Muslims are now 1.5 billion in number, including 450 million Arabs. And the Arabs, including the Palestinians, the descendants of Ishmael were directly and unconditionally, blessed by God in the Holy Bible, and described as "Princes":


"As for Ishmael, I have heard thee: Behold, I have blessed him, and will make him fruitful, and will multiply him exceedingly; twelve princes shall he beget, and I will make him a great nation." 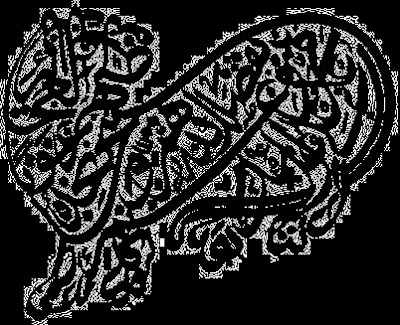 Persian cabalistic-Gnostic heresy within Islamic civilization goes back to the time of the Hurufi movement in Persia in the eighth century A.D. from within the Imami. It is the absolute basis of the Ismaeli heresy which has totally corrupted Egypt and Saudia Arabia down to the present. From Persia it spread to Turkey and became the Bektasiyya, who were totally immersed in Jewish Kabbalah. Centuries later Sabbatai Zvi was received there in Turkey by the Persian Shi'ite Muslim Bektasiyya, which predisposed the Sultan of Turkey to receiving and becoming the patron of Sabbatai Zvi. This led to Sabbateanism. The original, and still the core heresy and movement, is Persian-Iranian Shi'ism. It is the basis for ALL Zionism for the last 12 centuries. It is the Sephardic Zionist core and is who entrapped the Khazar Ashkenazim into Talmudic Judaism. When you speak of Iran, you are talking about the absolute basis and rulers of the synagogue who control all of Zionist Israel. There are more Rabbis in Iran than in most Jewish enclaves in the world.

Iran is very important to the Jews and the European Illuminati because it is central via its Shi'ism to subvert Islam from within. The Illuminati are behind that. 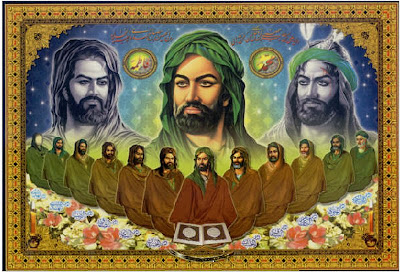 The Twelfth Imam was not revealed by Muhammad (PBUH) in the Holy Qur'an, but is an invention of men.


Our Lord and Saviour Jesus Christ warned of false prophets who come in His name. If someone claimed to be the Twelfth Imam in an esoteric Sufi sense [false sense and not a genuine sincere humble Sufi sense] and pointed to a figure like al-Hakim bi-Amr Allah of the Druze as the Mahdi he would be a false prophet and an antichrist by definition (both by definition from a Christian and Islamic point of view). When he pointed to this person (most likely an Freemasonic ecumenist) as the Mahdi who then, instead of witnessing to morality and blessing Jesus Christ, unifies both Sunni and Shia and a substantial portion of Islam around himself and strikes a peace agreement with the Antichrist (the Dajjal) in Jerusalem then this person claiming to be the Mahdi would be one of the ten horns (see Rev. 17:3, 7, 12, 16) that follow after the Beast (the Antichrist) and do his will and then there is the false peace St. Paul warned about. See: 1Thes:5:3 “For when they shall say: Peace and security; then shall sudden destruction come upon them, as the pains upon her that is with child, and they shall not escape.” (DRV)


One, an offshoot which shall arise from among the ten horns (kings or rulers), will come forward with the ten behind it and conquer three others before it and rule over seven as the eighth and this one will be the Antichrist (God alone knows at this point in time who that is). We will know when it happens. To follow or serve the Antichrist, ad-Dajjal, is certain damnation. The early Christian martyrs resisted even when it meant their death. 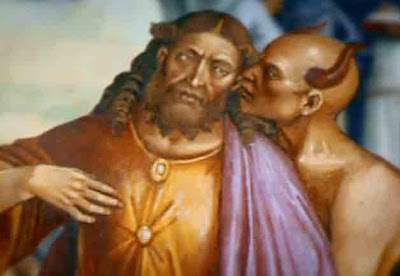 The Antichrist, ad-Dajjal, himself, will be a Jew and will rule his Diabolic empire from apostate Jersualem


Below: Father Sloet of Holland’s solution to the final name of the Antichrist (who will be a Jew) with medial kaph so the reign of this false “ ‘king’ of Israel” will be temporary, i.e. short.


The Apocalypse Of Saint John

[11] And I saw another beast coming up out of the earth, and he had two horns, like a lamb, and he spoke as a dragon. [12] And he executed all the power of the former beast in his sight; and he caused the earth, and them that dwell therein, to adore the first beast, whose wound to death was healed. [13] And he did great signs, so that he made also fire to come down from heaven unto the earth in the sight of men. [14] And he seduced them that dwell on the earth, for the signs, which were given him to do in the sight of the beast, saying to them that dwell on the earth, that they should make the image of the beast, which had the wound by the sword, and lived. [15] And it was given him to give life to the image of the beast, and that the image of the beast should speak; and should cause, that whosoever will not adore the image of the beast, should be slain.
[11] "Another beast"... This second beast with two horns, may be understood generally of the heathenish priests and magicians; the principal promoters both of idolatry and persecution - SPECIFICALLY, it is the false prophet that goes before the Antichrist as his "armour-bearer" see St. Irenaeus, 180 A.D., Against Heresies - Book 5 - Chapter XXVIII .


The Apocalypse Of Saint John 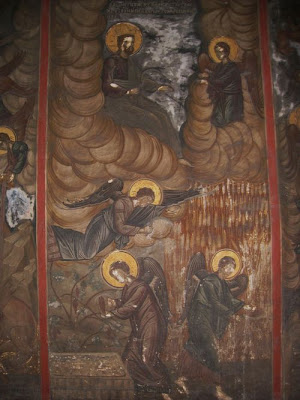 Of the Lamb and of the virgins that follow him.


John5:3 And there was a certain widow in that city, and she came to him, saying: Avenge me of my adversary.

John5:41 I receive glory not from men. 42 But I know you, that you have not the love of God in you. 43 I am come in the name of my Father, and you receive me not: if another shall come in his own name, him you will receive. 44 How can you believe, who receive glory one from another: and the glory which is from God alone, you do not seek? 45 Think not that I will accuse you to the Father. There is one that accuseth you, Moses, in whom you trust. 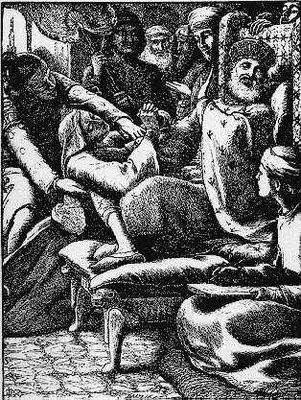 The unjust judge is Satan, the widow is Jerusalem who divorced herself from God and the one she receives is the son of perdition, the Antichrist, who "comes in his own name". 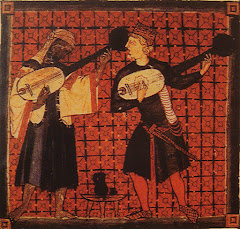